What makes for a great day of bug hunting...very few birds to see (it's just that time of the year), even fewer people in the area (not so many people looking at me like I'm crazy for laying/crawling in the dirt), and being sans toddler (3 year olds do not enjoy being still or quiet for long periods). So, my Saturday visit to the wetlands, which happened to be open to foot traffic only (which means significantly less people), while the toddler was spending the day with grandparents made for the perfect day to go exploring with my macro lens...

The Dainty Sulphur is a small butterfly that is found year round throughout Florida. I also saw several Cabbage White butterflies (also part of the sulphur family), which are pretty dull compared to the Dainty.


This was the first Ceraunus Blue that I've found. These butterflies are really small (3/4-1 inch) and easy to overlook. They are considered common and found year round in Florida. The species is very similar to the Cassius Blue. The Cassius, however, has 2 spots on the hindwing, where the Ceraunus only has one.


I think hairstreaks are some of the most interesting butterflies. Most (but not all) are identified by a small protruding "hair" at the bottom of its tail. This Gray Hairstreak was feeding on some Shepard's Needles, one of its favorite nectar sources.


White Peacocks are common throughout Florida and were the most abundant species I saw.


I observed both species of fritillaries laying eggs.

Queen butterflies are always delightful to see. Queens are cousins of a species they strongly resemble, the Monarchs. Both of these "milkweed butterflies" are part of the same subfamily and are known to lay their eggs on various types of milkweed. The ingestion of milkweed contributes to the defense of these species as it makes them toxic to predators.


The Common Checkered Skipper is found throughout Florida. These skippers like open areas with bare ground and low growing vegetation. Adults feed from a wide variety of flowers.


The Southern Skipperling is the smallest skipper in North America. This little fellow sure was tiny! 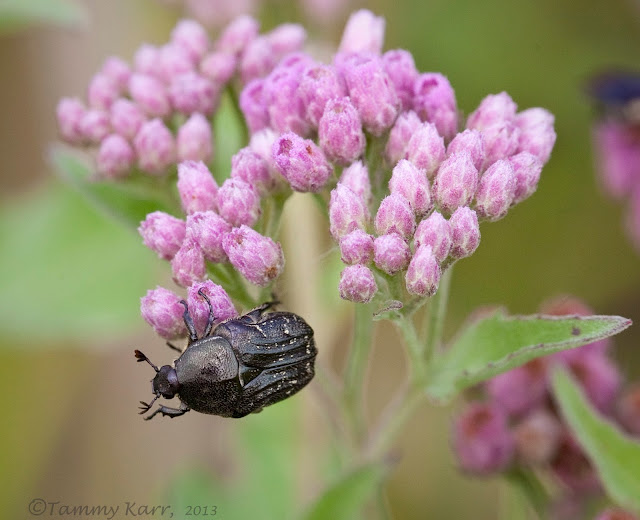 Some of the other species that I saw but didn't get any presentable photos of were Zebra Long-wings, Spicebush Swallowtails, Sleepy Oranges, and Cabbage White butterflies. So long for now....  next up the damselflies and dragonflies of the wetlands:)
Posted by Tammy at 4:33 AM