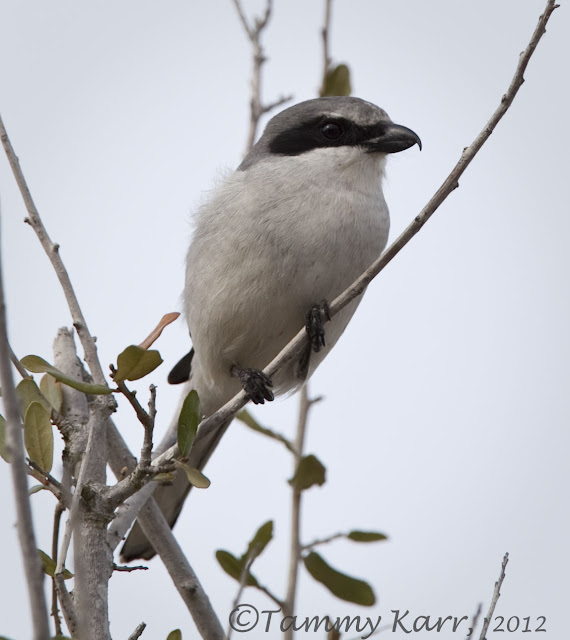 Loggerhead Shrikes use their hooked bills to capture and kills their prey, which are most often insects, lizards,  mice, and sometimes even other birds. 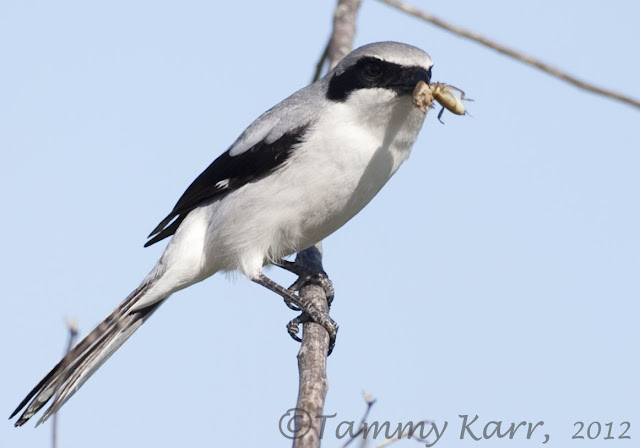 
I came across a family of 4 Sandhill Cranes this past week and enjoyed watching them work together as they foraged for bugs, mainly grubs, just off a popular shopping mart. Sandhill Cranes chicks initially feed by pecking the food from their parents bill.  They soon learn how to feed on their own. Their parents, however, continue to assist with feeding and protecting them for nearly a year. 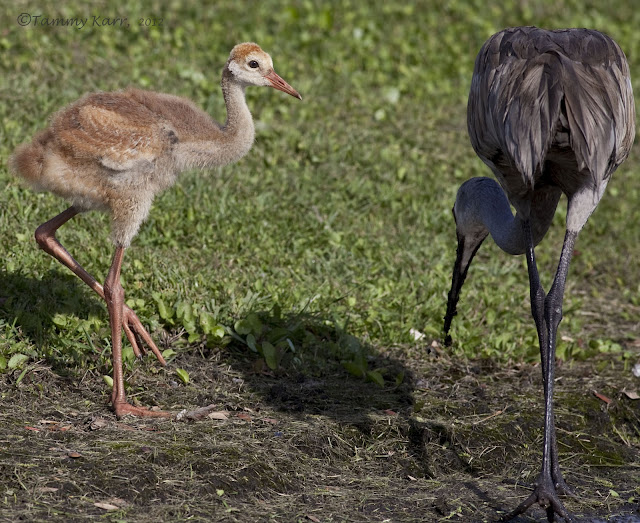 The adult Cranes were foraging deep in the ground as the chicks watched intently for their share of the grubs. 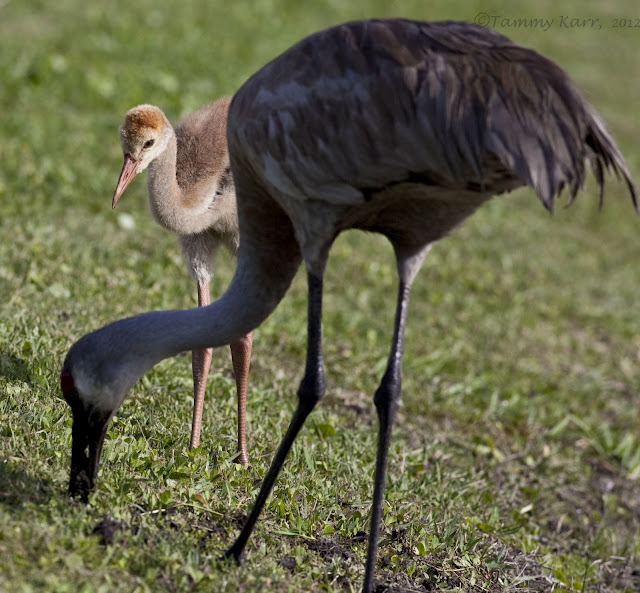 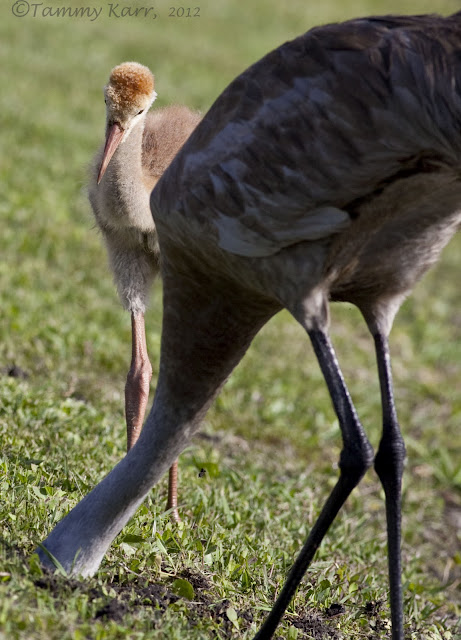 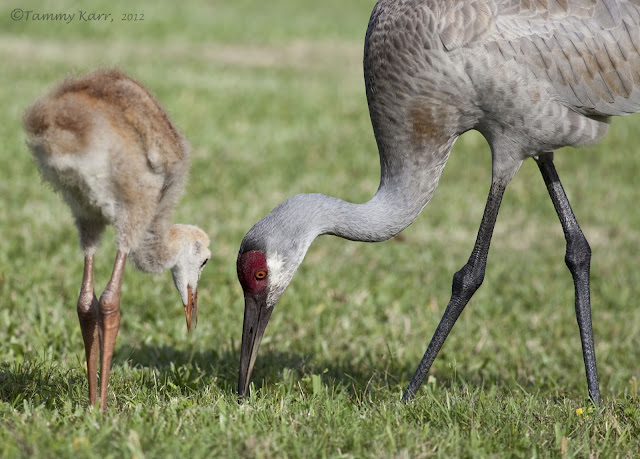 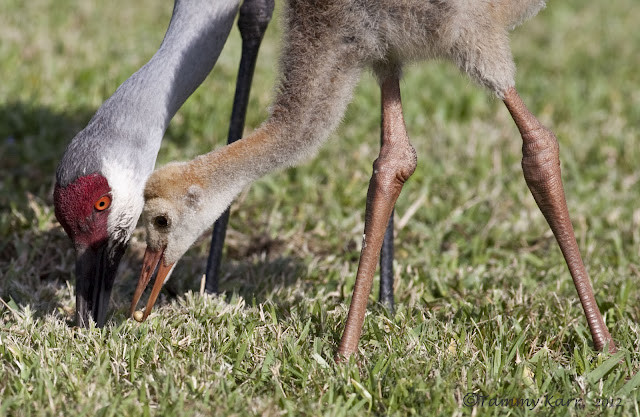 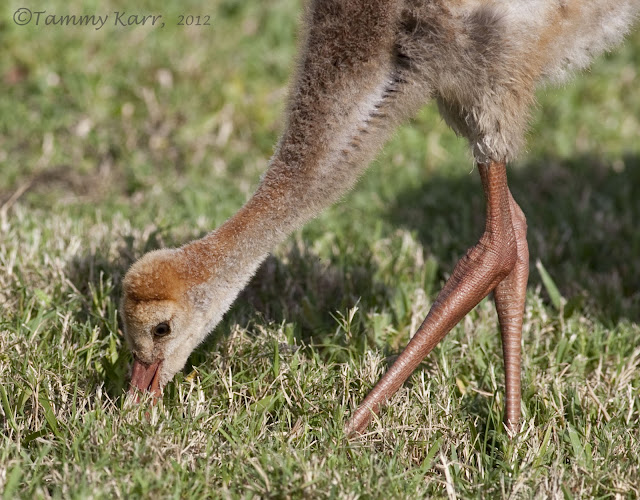 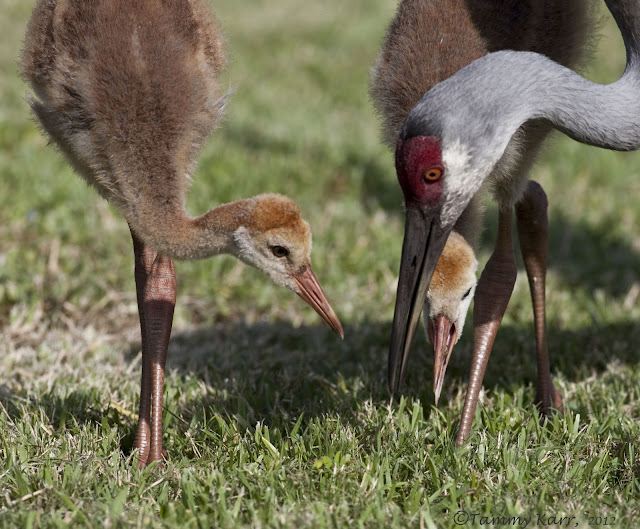 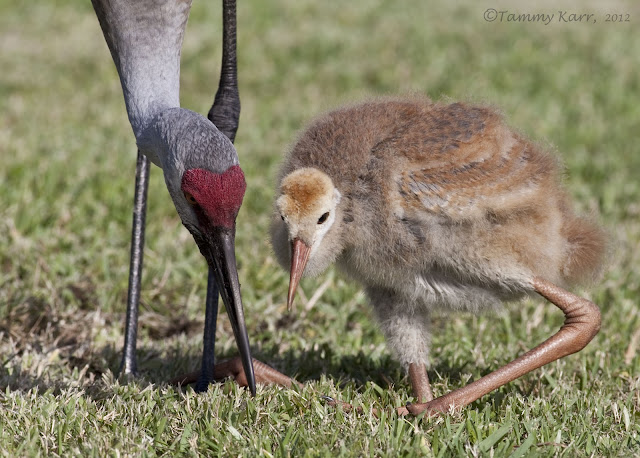 This guy got a little worn out from all the hard work! 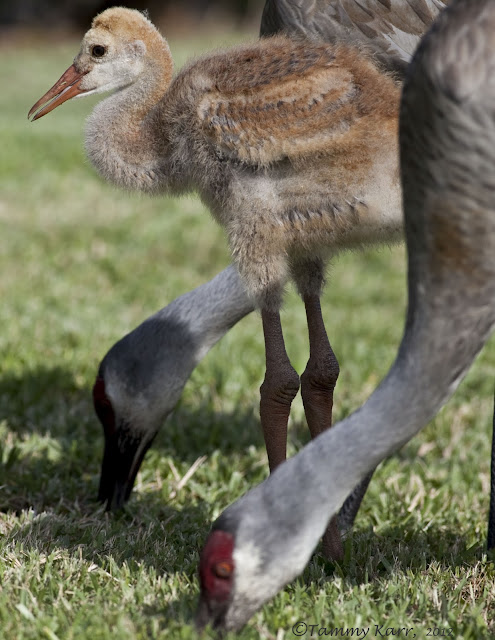 Here are a few of my favorite moments of reflection at Merritt Island National Wildlife Refuge last week.

I took a mid morning stroll through the wetlands yesterday with my now 2-year old. We didn't cover a very large area, but we did enjoy the interesting birds and behaviors we observed, particularly this pair of terns.

We came upon these terns as they stood in the road engaging in what appeared to be a heated discussion. These terns produce some interesting loud, harsh croaking sounds. 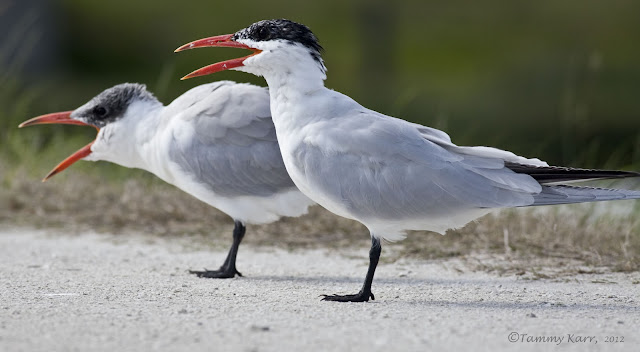 Amidst the discussion, this tern regurgitated something... 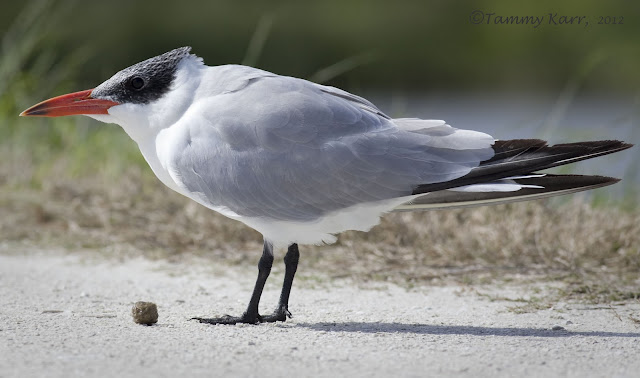 While Caspian Terns are known to provide for their offspring for extended periods, I don't believe that was this tern's intention. Caspian Terns typically feed their young whole fish. Both birds seemed perplexed by the strange object excreted by the tern. 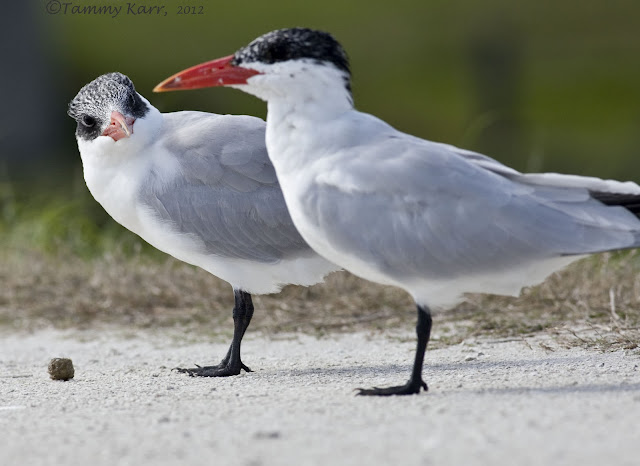 The second tern tried to get a better look. 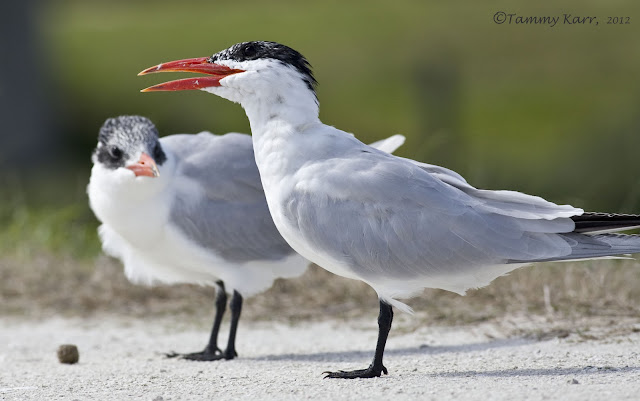 There was some discussion about what sort of things this tern has been consuming....meatballs??? 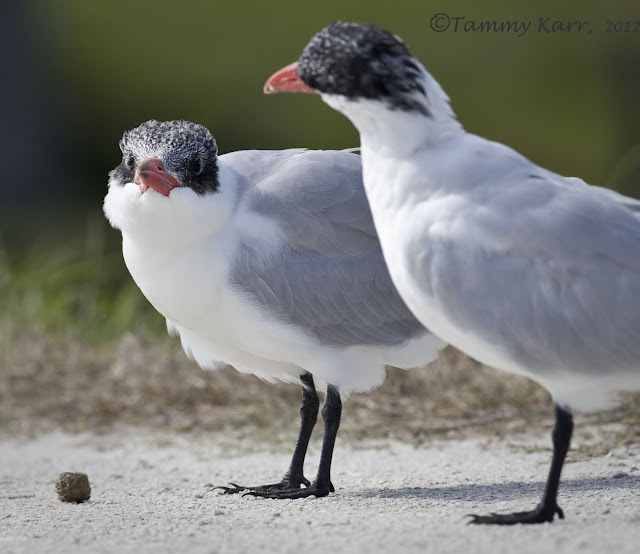 He decided to plead the fifth...


The Blue-Winged Teal and Limpkin were both so kind to pose for us.

The caterpillars don't stand much of a chance against the hungry birds!


This adolescent GBH appeared to be letting mom know it was time for lunch!
Posted by Tammy at 10:35 AM 31 comments:

The Great Blue Heron chicks are approximately one month old. It is amazing to see how quickly they grow!  The chicks typically fledge around 2 months old, so they have to grow quickly to reach heights of 3 to 4 feet in a  two month period! 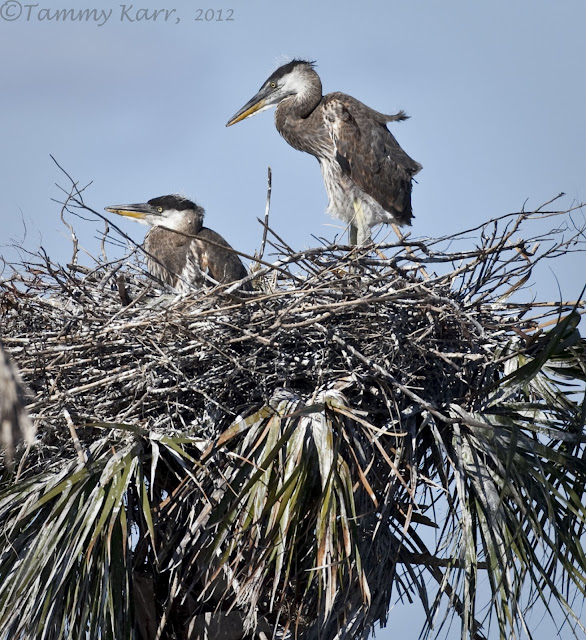 These are the youngest two of the group, and may be closer to 3 weeks old. Those wings still have a ways to go to reach a 6 foot wing span! 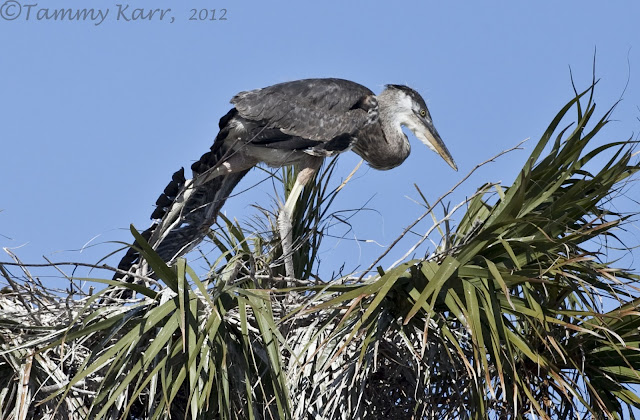 This chick is the oldest one of the bunch. Quite a difference a week or two can make in the length of the wingspan. 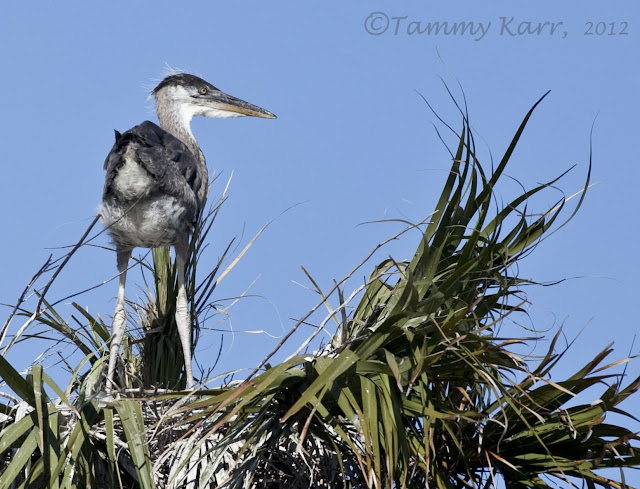 A little over a month ago I noticed two ears protuding from an Osprey's nest in a tall Pine tree. I knew instantly it was my favorite raptor, the Great Horned Owl, residing in the enormous nest that had been built by an Osprey. Great Horned Owls are known for taking over nests rather than building their own. I quickly turned around and drove past the nest a second time, this time seeing the owl clearly. I was super excited to discover this owl nesting along the main highway I travel regularly to work. I have been viewing the nest regularly and on this past Monday noticed the adult was not in her position. I thought it was possible that there were no successful hatchlings and she left, as that was the case of the nesting GHOs on my street last year. On Wednesday,  though, two white, fuzzy heads were visible! I stopped  by on my way to MINWR on Saturday and took a few photographs. It was early morning when I photographed these chicks high up in the Pine; they sure are adorable!

Very little wind and bright blue skies made for a great morning at the Merritt Island NWR. It has been a little over a month since I visited and there seemed to be fewer visiting birds. Shore birds were the most abundant birds at the refugee today. I observed one or more of the following varieties: Willet, Dunlin, Killdeer, Greater and Lesser Yellowlegs, Least Sandpiper, Black-bellied Plover, and Wilson's Snipe.

The variety of ducks was minimal. I saw numerous Blue-winged Teals and Northern Shovelers as well as one Mottled Duck. There were several Coots throughout the area. I saw a few pairs of nesting Ospreys, but no other raptors. There were a few Roseate Spoonbills; I had a opportunity to observe one foraging right near the shore. 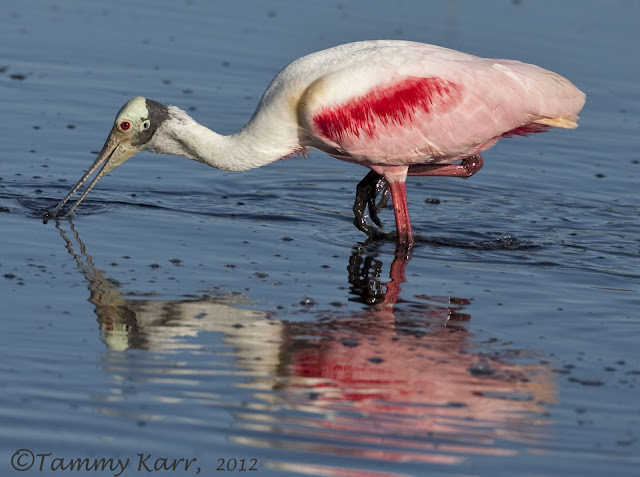 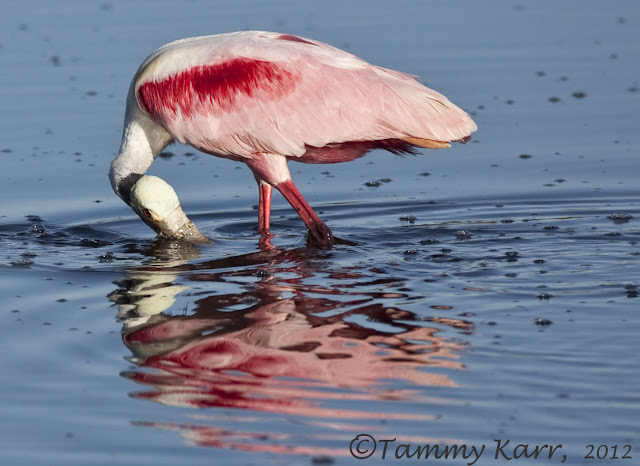 Since I have been without any feathered friends this week, I thought I'd share an interesting creature I've photographed. I found this Treefrog resting on my car, and he didn't seem to mind the camera so I snapped a few photos. He seemed quite mellow and I was happy he didn't decide to jump on me. I didn't happen to notice how dirty my car was till I viewed the photos! 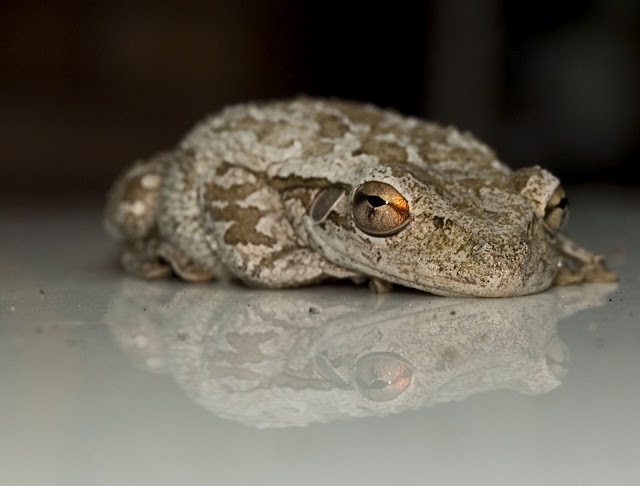 I believe this is a Cuban Treefrog, an invasive species to Florida. Florida is home to 27 species of frogs, as well as 3 invasive species. I do not  regularly find these around the yard, which from what I've read is a good thing. Cuban Treefrogs are known to be big eaters, consuming large numbers of insects, native frogs, lizards, and even small snakes. 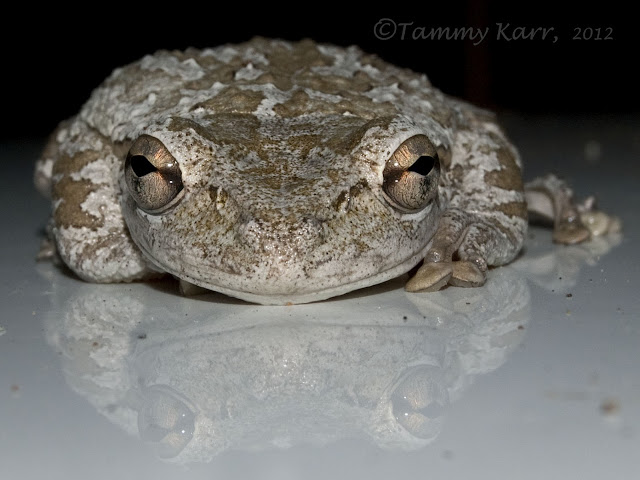 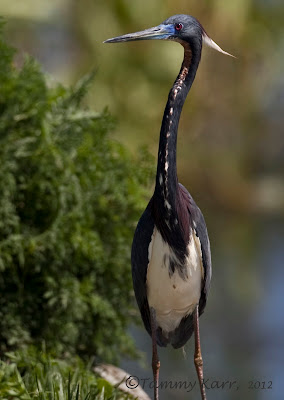 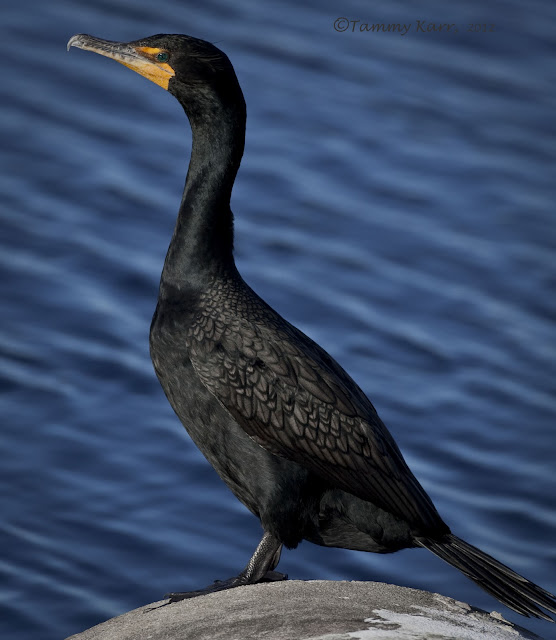 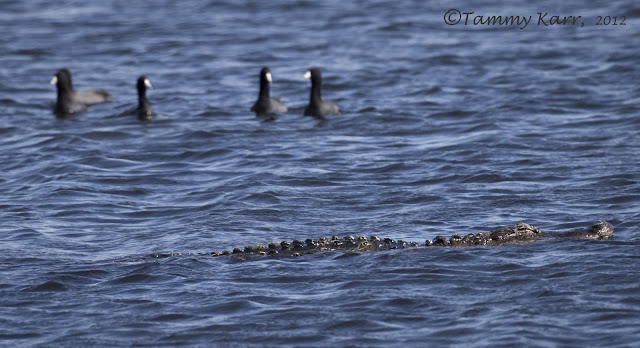 The Blue-winged Teal found the whole ordeal amusing, but he wasn't getting in the water either!
Posted by Tammy at 4:50 AM 47 comments: