Its been a while since I've spent a morning birding solo, without my mini-birder, as I did Monday morning. I spent the morning exploring Merritt Island NWR, starting with a drive along Blackpoint Drive. Around the area of the second observation stop, I came across a very large mixed group of ducks. Most have made their way to the area to spend the winter here. I saw the first Northern Pintails, American Wigeons, Gadwalls, and Green-winged Teals of the season. I also saw Blue-winged Teals, Northern Shovelers, and Mottled Ducks.


I saw this solo American Avocet foraging near a small group of Teals. I'm always delighted to see these elegant shorebirds! There were several large groups of waders around. I saw 2 Northern Harriers patrolling the area. There were numerous Belted Kingfishers along the way.Yellow-rumped Warblers, Palm Warblers, Gray Catbirds, Savannah Sparrows, and Common Yellow Throats were abundant. I saw Caspian, Forster's, and Royal Terns. There have been a few recent Gull-billed Tern sightings, but I didn't come across one.  Maybe next time!

I also checked out Biolab Road. Dunlin and Least Sandpipers were plentiful along the shallow shore lines.


This Osprey had just caught its lunch.

The highlight of my day was near the end of Biolab Rd. where I encountered an area populated with over 500 birds. They were mostly waders, Spoonbills, Ibises, Egrets, and Herons, but seeing the mass in action was cool. There was also a large group of White Pelicans that were foraging cooperatively in the shallow waters. 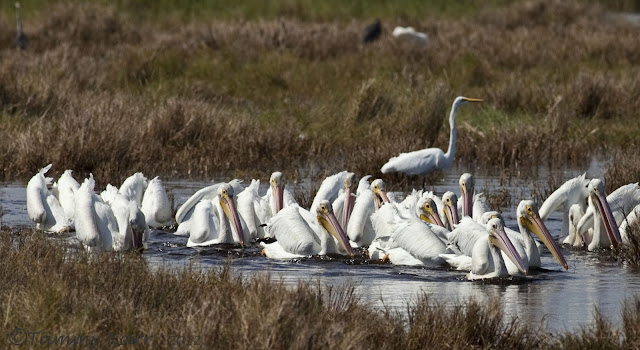 I ended up with a species count of 64 for the morning. I'm looking forward to getting back there soon!
Posted by Tammy at 6:45 PM