Luckily, the light is shining at the end of this busy week's tunnel, and summer break is now only 2 weeks away! I've haven't made it to any of my favorite patches in nearly a week, but thankfully a few kind birds have shown up in some of the places I have made to! Here are a few of the locals (or possibly visitors) that I've encountered....

I've been keeping an eye out for the new Sandhill Crane family since spotting them two weeks ago. Saturday I came across them as I passed through a nearby neighborhood. The chicks, of course, have grown tremendously in just 2 weeks. This one seemed to be aware of the appropriate place to walk as it meandered down the sidewalk.

I was rather amused to see one of the adults take a detour through a yard to cool off in someone's sprinkler. The rest of the family followed suit. It was quite warm last weekend.

I've noticed the Osprey, the one who built the nest in my neighbor's tree, appears to have attracted a mate; way to go! Sunday night, though, some sort of melee broke out when a third Osprey decided to try and get in on the mix. The sun had already set and the residual light didn't work in favor of capturing any decent photos. 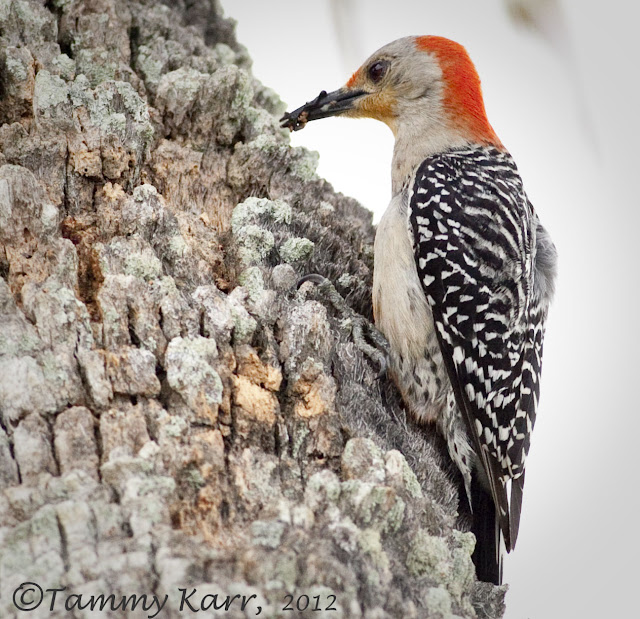 This Red-bellied Woodpecker was pulling some unidentifiable matter from the palm tree in my yard.

We did manage a short trip to the park to help my son expend some energy. I was happy to notice that we were not alone as three Semipalmated Plover had stopped by the river's edge to forage.

"Purple" bird sightings seem to be the theme over the past few weeks . It started with this Purple Gallinule I spotted at the wetlands a week ago. A few other observers I spoke to relayed that there were two in the area and that the Gallinules appeared to be collecting nesting materials. Purple Gallinule babies would be cool to see! I've only seen this species here on one other occasion.


Today, I came across a small, but noisy flock of Purple Martins. They are not quite as "purple" as the Gallinule, but they were interesting to watch. I noted at least 8 females and 2 males.


Even though its name doesn't contain the word purple, this Boat-Tailed Grackle was looking quite dapper showing off its iridescent purple and blue in the sun.