Warblers at the Park

This past weekend, I stopped off at the beach in Cape Canaveral to see if any different gulls or terns were mulling around. They weren't and the wind was ripping, so away I went. I passed by a really small park with many different types of trees, so I decided to stop and see if any birds were out and about. Turned out to be quite enjoyable as I quietly sat on the ground and listened to the variety of songs. I didn't see a very large number of species, but I did see some interesting interactions.There were several dozen Yellow-rumped Warblers enjoying the berries on the ground.

A few Palm Warblers were also in the area.

I even picked up a new lifer, one of the smallest warblers, a Northern Parula. I only caught a quick glimpse, snapped a few photos, and off it went.

There were several Northern Mockingbirds enjoying the berries as well. This one was taking a rest in the bushes after consuming its lunch.


There was also a pair of Eurasian Collared-Doves engaging in some sort of interaction. It looked like they were fighting, but they could have been mating. They would lift a few feet off the ground, then collide with one another midair I thought someone was going to end up with a broken wing. I didn't manage to get any presentable images of that, sorry. 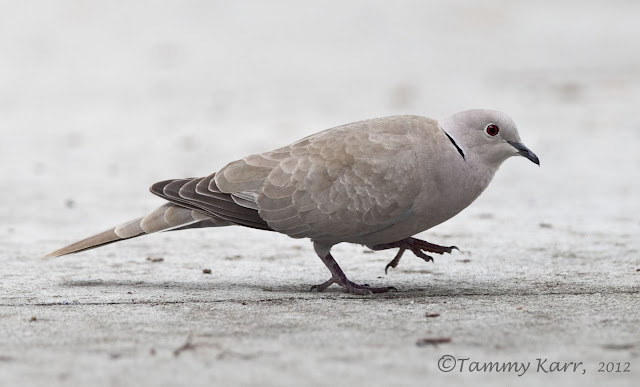