A little over a week ago, I visited the Beaver Lake Bird Sanctuary on my final day in Asheville. The sanctuary has a forest trail and a boardwalk through wetlands and an eco-filter pond. We first explored the winding trail that makes its way through the lakeside wooded area. I heard an abundance of bird songs as I scanned the tall trees and I know there were probably a few species I missed. I was trying to keep a steady pace, hoping to make it around the lake without a revolt from the toddler. It wasn't an even half way decent photography day, but the day was still quite enjoyable none the less.


The trees were full of Eastern Towhees, Tufted Titmice, Song Sparrows, Yellow-rumped Warblers, and Carolina Chickadees.The wasn't any waterfowl in the lake's receded waters. The only ducks we saw were a pair of Mallards, and believe it or not, they were standing in the middle of the trail. A lone Belted Kingfisher passed by us a few times. A lone Great Egret stood statuesquely in the marshy edges of the lake. A Pileated Woodpecker flew right in front of us on its way to a distance tree. The trail in the wooded area came to an end near a residential area but continued along some tall grass, still overlooking the lake. I began to wonder if the trail really went around the whole lake, as I had forgotten to look at the trail map when we started. Thinking positively, we continued on, until we reached a dead end, a little more than half way around. 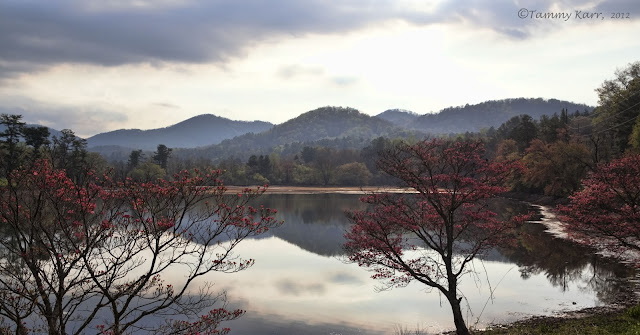 This was the view as we turned back. After making our way back, we headed to the boardwalk. Along this less than 1/2 mile walk we spotted numerous Northern Cardinals, three Blue Jays, one Mockingbird, several Tree Swallows, 2 Mourning Doves, and a Carolina Wren. Several flocks of Canadian Geese were seen and heard flying overhead. 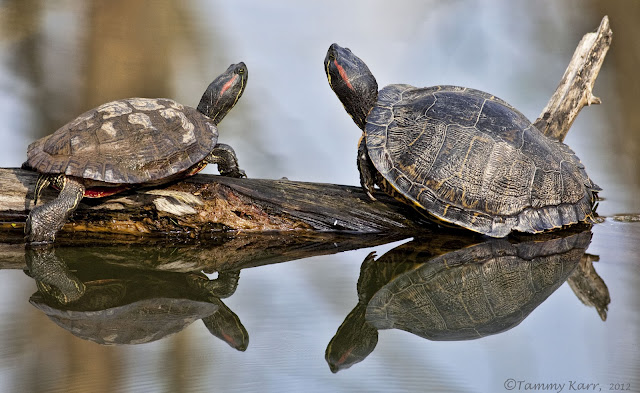 We ended the day at the eco-filter pond where there were several turtles. These two seemed to have their minds elsewhere and didn't notice our presence.

I hope you all have a very Happy Easter!

Also, be sure to check out my monthly post at www.birdingisfun.com today:)