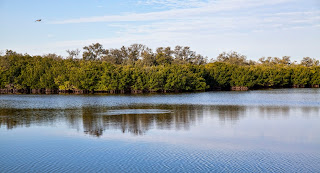 I finally had a chance to visit the J.N. "Ding" Darling National Wildlife Refuge last week. It's located on the barrier island of Sanibel, Florida in the Gulf of Mexico. I've really wanted to visit here for quite some time and was not disappointed. I was only able to visit one day and was lucky to have  great weather that day! I made two trips through the Wildlife Drive, one early morning and one at low tide, which is reported to be the best time to visit. The crowds were quite large at low tide, so the early morning visit was much more enjoyable.

This Great Egret decided to start early on his New Year's resolution to eat less.

This immature Little Blue Heron was hoping to do better than the Great Egret.

This nicely hued fellow was fishing right next to his nonhued immature buddy.

The Osprey appeared to have really enjoyed his catch of the day. Good to the last bite!

Apparently personal  space is an issue with this White Pelican.

Through the crystal clear, shallow water I was actually able to watch this Cormorant swim underwater. Pretty cool.
Posted by Tammy at 10:22 AM